Six dividend growth stocks from the energy infrastructure space are discussed. They offer yields of 4.6-7.5% and double-digit price appreciation potential in the near term.

The energy infrastructure stocks have pulled back meaningfully due more or less to the lower commodity prices. These stocks are safer and less volatile than energy stocks, which have direct exposure to lower-priced commodities.

For income investors, it is a good opportunity to consider the energy infrastructure stocks, which tend to grow their dividends over time. Enbridge is the biggest company with the largest scale. Here’s how the company looks like after combining with Spectra Energy Corp. If you’re looking for safety and strong dividend growth, Enbridge is your stock. 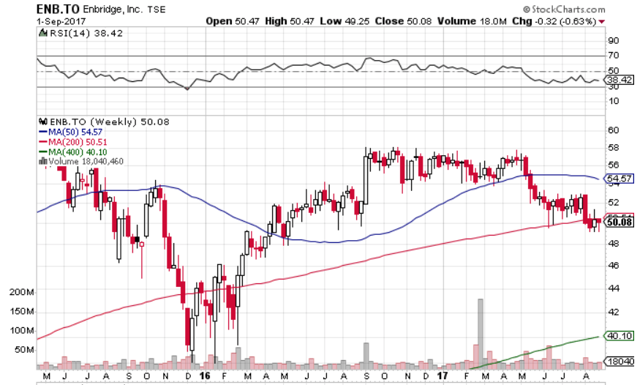 Enbridge is a diversified business. It produces and processes natural gas, has a complex pipeline system that transports liquids and gas across North America, and generates power with wind, solar, and geothermal facilities.

The company has increased its dividend per share (“DPS”) for 21 consecutive years. In the last 20 years, it has compounded its DPS by 11.2% per year.

The street consensus at Thomson Reuters [TSX:TRI](NYSE:TRI) has a mean 12-month target of C$62.30 on the stock, which represents ~24% upside potential in the near term. 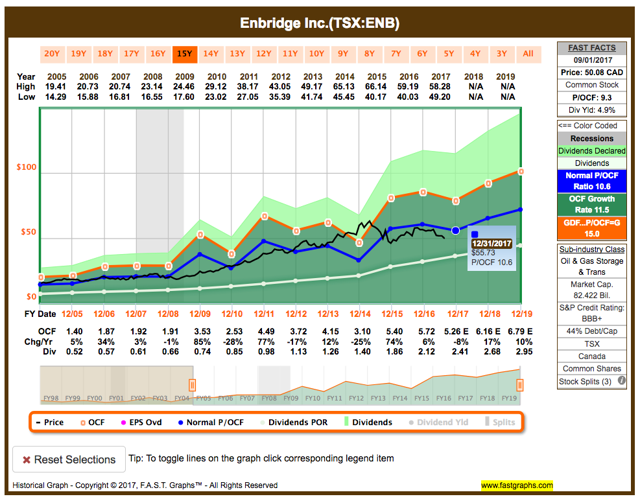 F.A.S.T. Graphs also show that Enbridge is undervalued as a multi-year investment as its cash flow per share growth is estimated to grow at a double-digit rate in 2018 and 2019.

END_OF_DOCUMENT_TOKEN_TO_BE_REPLACED

Exploring 5 mid-cap Canadian pipelines that have maintained their dividends since oil prices have plummeted. Interestingly, some even increased their dividends twice in the last 12 months. Mid-cap businesses are safer than small-caps, and mid-caps could provide higher returns than large caps. Which of Altagas Ltd (TSX:ALA), Enbridge Income Fund Holdings Inc (TSX:ENF), Inter Pipeline Ltd (TSX:IPL), Keyera Corp (TSX:KEY), or Veresen Inc (TSX:VSN) pays out safer dividends compared with the group?

Mid-cap pipeline companies should provide higher returns than the large-caps when commodity prices improve because of the smaller sizes of the mid-caps. At the same time, mid-cap businesses are safer than small-caps.

One may be tempted to buy Veresen because of its 14.6% yield, the highest yield of the group. However, its high yield is solely because of its price decline; it has only maintained its monthly dividend from a year ago.